Winds from far-off lands
assaulted the bluff
which rose from the sea.
A girl balanced on the precipice and
opened her arms to the gale.
The torrent fulfilled her need for self-flagellation as
it beat upon her torso
and molded her dress
to her body.

Blasts separated the strands of her hair and
forced them into
her eyes and
her mouth and
circled her ears and
her nose and
her neck.
Her ankles were sliced
by the saw grass that
grew wild on the bluff.
She pressed her arms to her chest.
She had been here before
in search of guidance from her gods.

In concert with the will of the wind
she flung back her head and
raised her hands to the heavens.
Her unspoken plea was answered.
A squall reversed the direction of the storm and
exploded behind her
sending its vengeance to the sea.

Her equilibrium was lost to the sudden change.
She took a step forward.
The earth fell away as
she soared off the bluff and
rode the wind into space.
The gods had spoken.
She would not be forgiven.
She would pay for her sin with death.
A feeling of peace settled over her.

As if in repudiation of her acceptance of her fate
the winds shifted again.
They blew her body back to land.
The momentary relief she had experienced
was gone
and she was left to pay for her transgressions
with the curse of life
rather than the gift of death.

A hadith (Arabic plural: ahadith) is a saying, report, account, tradition attributed to the Islamic prophet, Muhammad, and his companions. While the Qur’an is the holy book of Islam, hadith literature is second in importance and is recognized as a major source of moral and legal guidance.

Hadith are the oral accounts of Muhammad’s life and teachings that were passed along during the first three hundred years of Islam’s development. Many thousands circulated, duplications and misstatements proliferated. In the eighth and ninth centuries, they were compiled and judged on the basis of text (how likely was it that Muhammed or his followers expressed the idea) and provenance (who told it to whom and how was the message carried forward). For the Sunnis, this process resulted in six books, the best-known of which are the Sahih al-Bukhari and the Sahih Muslim. The Shi’a reference four different compilations.

Hadith address all matters that impact humankind, from birth to death, physical to faith, moral to commercial, and along with the Qur’an, are the basis for Sharia law which rules on secular and religious behavior.

Daria Johnson left her cabin on board the Liberia and stepped on deck. Days of high winds, rain and heavy seas had bedeviled the ship and she had been bedridden with seasickness. She thanked the Lord that her husband had been able to afford a cabin. She had heard the moans and cries of anguish that emanated from steerage. When the wind died down, the odor of human effluence hung in the air. It was worse than anything she had encountered during her years in plantation slave quarters.

Daria had been born in bondage, as had her mother, grandmother and grandmother’s mother before her. There had always been a white father and with each generation, the women’s black roots had been diluted. Daria, still a beautiful woman at thirty-six years of age, had skin the color of a sun-kissed, white, farm girl.

Daria was also born beautiful. Her owner noticed her as her breasts began to mound, and when her menses came, she was moved into a small cabin at the edge of the plantation. The man visited frequently, and she lived in relative comfort until her baby came. When his wife learned of the young, cream-colored slave and her white baby, she covertly arranged for them to be sold to different plantation owners. Daria never saw her first-born daughter again.

Her new master lived many miles away in Petersburg, Virginia. Daria worked in the kitchen of the main house and accompanied the cook on errands in town. One of the stores they visited was owned by a successful, black businessman, Hagar Johnson. He was attracted to the beauty and quiet manner of the young woman. After several weeks of deliberation, her owner extracted an exorbitant amount of money from the smitten merchant who purchased her freedom.

Hagar allowed Daria to live, untouched, in his room over the store until he thought it time for them to marry. Although she found him a bit persnickety, she appreciated his good character and honorable intentions. Over time, she came to love him, bore him a daughter and settled in to a life of privilege known to few black women in the South.

Hagar’s decision to travel thousands of miles away to Liberia had come as a shock. Daria had no interest in Africa and now the continent lay in front of her. Tribal memories which define so many slaves had been forgotten by her womenfolk. Their stories were of plantation life and the white families who owned them. Africa was a primitive, alien land and she wanted no part of it. She prayed for a safe visit and a speedy return to her roots in America.

Provider of shade
During months of hell.
Producer for trade
Oil, wood to sell.

The newly ordained Balderston Baker Brimmer steadied himself on the deck of the brig, Liberia. His eyes were locked on the rough silhouette of Cape Mount rising one thousand feet in the distance. A year ago, in 1829, he had seen a print of the mountain, along with other depictions of the West African coastline. He remembered the romantic images of turbulent seas and rugged shores that had inspired him to accept a position as minister to American emigrants to Liberia. He continued to survey the terrain, and the etchings of white beaches, black rocks and dense forests became realities as the brig turned south.

Hours later, the massive, steep-sided, flat-topped landmark of Cape Mesurado came into view. Palms and mangroves, intermingled with unfamiliar varieties of trees and shrubs, covered the hills that lined a large bay. Beyond a sandy promontory, Balderston could see the buildings of Monrovia in the distance.

For the first time since he embarked on his adventure, he admitted to the fears that had been circling his brain: fear of the unknown, of Liberia, the fledgling colony founded by the American Colonization Society and populated by free-born and manumitted black slaves; fear of being one of a handful of Caucasians allowed to live in the all-black colony; fear of the natives whom his fellow passengers had painted as wild savages; fear of the fever that felled so many emigrants from the west.

Balderston continued to indulge his insecurities as the crew lowered the anchor. He became aware of a low din of muted voices. He turned and saw the other passengers, huddled in small groups, quietly expressing their own doubts and fears. He walked amidships and raised his arms.

Looking up at the sky, he intoned, “Heavenly Father, bless us, your humble servants, and bless this land….”

By the time he had finished his prayer of thanksgiving, the Reverend and his parishioners had reaffirmed their faith in God and Liberia and were, once again, prepared to take on the challenge of this strange and mysterious land.

My Past Is My Future

This year of our Lord 1830 marks the beginning of my new life.  I am one of fifty-seven black emigrants sailing from Norfolk, Virginia, to Liberia, in West Africa. We’ve been at sea for over forty days, and since crossing the Tropic of Cancer, the heat has intensified, making our quarters in steerage unbearable. On clear nights, I abandon my bunk and sleep on deck with other men who stretch out, shoulder to shoulder, on any available flat surface. The smells of the hold cling to our bodies, our clothes, and I welcome the winds from the sea that cleanse my nostrils.

I step down from the hatch where I’ve spent the night and make my way to the bow of the ship. A damp shroud of fog envelopes me and I revel in the cool it brings to my sun-dried skin. The fog lifts and a sliver of light breaks the horizon line. The grey sky of dawn streaks with crimson and gold as the sun rises in front of me. I gasp as a low, flat shoreline is backdropped by the kaleidoscope of brilliant color. I am overwhelmed by this spectacular revelation of land after so many days at sea.

I throw my head back and raise my arms to the sky in celebration. I am finally within reach of the land of my birth, and of my future. My journey home is no longer just a dream. 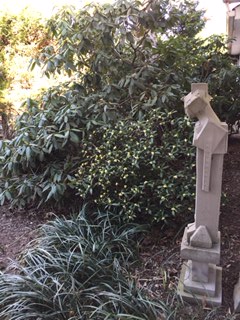